Menu
Log in
Register
Install the app
You are using an out of date browser. It may not display this or other websites correctly.
You should upgrade or use an alternative browser.

At the risk of introducing my self twice....

Hello all, I'm Don from Kansas City. I had a C650 Sport but traded it in on a Vespa GTS. As good as that was, it wasn't the perfect scooter. Soooooo, I bought a 2022 C 400GT. Retirement is just around the corner so I have some bucket list trips I hope to check off before I'm too old to ride.
S

Newbie here, 2014 650GT Highline. Easy the best handling anything I've ever owned. Bought very recently with a side stand that held the bike somewhere just off horizontal

just in middle of putting it right, pics to follow. Great forum, lots of help and advice, thank you. Shaun (uk)

Hello from Overland Park, Kansas. Just traded in my 2010 Triumph Thunderbird for a 2022 C400GT. Quite a change for me but so far I'm liking it. The Thunderbird was getting a bit much for me to handle and at 66 it was time to lighten the load.

Hello All,
Naperville, Illinois here. Just traded in my '16 Honda Fury for a '22 C 400 GT. Quite the change but delighted. Already have have 1.1K on it and having a blast. Just turned 64 and comfort now rules! Still getting waves from bikers which surprised me. I think its the wicked looking front on the bike. When they see its a scooter they quickly turn their heads and bring down their arms like they just saw Medusa!!
C

I’m from Schaffhausen Switzerland. Just bought a 2017 Highline. Don’t have it yet but next Saturday. Waiting eagerly to ride it.
V

rongrimes said:
Ron from Sandy Utah. Just traded my R!200RT for a CE-04. Big fan of this scooter.
Click to expand...

Do you have another bike for long day trips, or are those not in your plans? Just curious, as I do 200 - 300-mile day trips (in NY, MA, and VT) once or twice a week, and as a one-bike owner could not make do with an electric bike.

wspollack said:
Do you have another bike for long day trips, or are those not in your plans? Just curious, as I do 200 - 300-mile day trips (in NY, MA, and VT) once or twice a week, and as a one-bike owner could not make do with an electric bike.
Click to expand...

No, but I'm eyeing something like a Triumph T120 or Speedmaster for those types of trips. I don't feel like I need a touring bike for the types of trips you cite.

rongrimes said:
No, but I'm eyeing something like a Triumph T120 or Speedmaster for those types of trips. I don't feel like I need a touring bike for the types of trips you cite.
Click to expand...

Me, I’m loving my ‘22 C400GT; got 2400-something miles on it in two months now. Impressively peppy (to me, anyway) and smooth, and superb handling.

I do approx. one multi-day trip a year, in the realm of what you might call touring: NY to NC (daughter there). I have one coming up, and so I’ll get to see how capable a tourer it is. Regardless, that’s a small percentage of my riding, a week or so a year.

Good hunting on your next bike.
K

Key_to_life said:
I have c650 sport and avoid turnpike you are a brave guy taking that c400 on that trip
Click to expand...

Well, I certainly prefer riding the backroads to the major highways. For instance, here's a just-goofing-off trip I took yesterday -- about 230 miles, and no Interstate riding until the last 15 minutes or so: 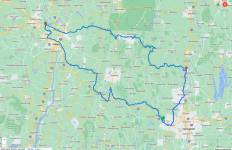 And here are a couple of chunks from the middle of that ride, just the sort of riding we both prefer, I gather:

However, sometimes it's necessary to do straight highway riding, given a limited timeframe for being away from home and because my daughters live in far-flung states, for instance. In those cases, I usually do nothing but highway riding to get to where I'm going, but often take a day off in the middle of visits to do some local twisties.

The C 400 GT is quite capable of doing highway slogs, with a top speed of 86 MPH (at least, that's what both the owner's manual and my GPS say), which is fast enough for most highways; the bike is very stable at that speed, not noticeably different from, say, 70. And it's capable of doing that reasonably fast speed all day long, according to a friend of mine who just completed a SaddleSore 1000 (1,000 miles, in less than 24 hours) on one:


So, I wouldn't call my upcoming trip all that "brave."
B

Hello all. I'm Bob from the UK. I have been running a CE 04 since April 2022, it's my first scooter and my first electric bike. I also run a R1200R and a Honda NC750x DCT. I'm amazed at how well the CE 04 handles twisty roads and how well it copes on the motorway.
B

Greetings to everyone from Türkiye. I'm so glad I found this forum. I own a 2012 and 2016 C650GT. Even though I have difficulty in finding accessories and spare parts in Türkiye, this engine is very enjoyable. I haven't used my other motorcycles since I bought a bmw scooter. Pleased to meet you . I am Omer See you
C

@Christophe, do you own a BMW scooter?
C

I was wondering about highway range. My commute is a little under 50 miles. Most of this is rural, probably average 45 mph. Will I need to charge or have you experienced this kind of range. I had a Zero for a couple of years and its battery was 14.7 and I made this commute easily. I think I would be pushing the limit. TIA.
B

I think you will probably be OK but I wouldn't want to do a regular commute much longer than 50 miles out of sympathy for the battery. Obviously range depends on how you ride. Without trying to be economical but staying within speed limits, I get about 7 miles per kWh which would give about 50 miles with some margin. If I pin it on the motorway and hold a constant indicated 79 mph I expect to get less than 3 miles per kWh. If I go really gently around town I could probably get 11 miles per kWh or a bit more. Riding a mix of roads with a nod to economy or being stuck in traffic would probably give an average of about 8 miles per kWh.

I do a regular trip of about 40 miles with a mix of roads including villages, town, country road (at about 60 mph max) and some dual carriageway (at about 70 mph max). If I start at 100% then by the time I get back home after 40 miles I have been down to low 40s % riding in road mode at temperatures about 15˚C. Yesterday it was 7 to 8˚C, from a 100% charge (at the destination) I did the 20 miles return leg riding in Road mode and was down to 60%. This involved some fairly high speed sections on the dual carriageway and I wasn't hanging about on the country roads but it was slow going through some of the villages. I should note that I have a 58 litre top box, a BMW tall screen with with a Wunderlich wind deflector and a pair of Wunderlich hand guards fitted.

On another occasion, during the summer (although it was cool and raining) I did a 55 mile journey on fast roads with a speed limit of 60 mph starting with about 95% charge and got home with about 2% left. Initially, I didn't ride economically since I planned to stop for a top-up but then decided to switch to a no-stop strategy and then started riding as economically as possible when range anxiety set in.

So, given my experience so far, my gut feel is that about 60 miles of range is achievable (without draining the battery to a very low charge) on a mix of roads but this will require a little effort to ride economically such as avoiding doing more than 50 mph for extended periods. I should note that performance drops off a bit in the range 0 to 10% but not dangerously so. As an experiment I once ran the battery down to 0% but the bike still had loads of power left. However, to maximise battery life, I wouldn't like to regularly go below 20% charge. An average speed of 45 mph is quite high though so you might struggle.
Last edited: Yesterday at 9:01 AM
You must log in or register to reply here.
Share:
Facebook Twitter Reddit Pinterest Tumblr WhatsApp Email Share Link
Top
✖
AdBlock Detected

We get it, advertisements are annoying!

Sure, ad-blocking software does a great job at blocking ads, but it also blocks useful features of our website. For the best site experience please disable your AdBlocker.

I've Disabled AdBlock
No Thanks